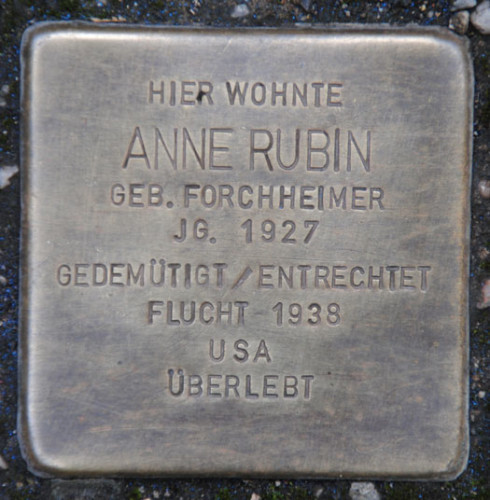 Anne Forchheimer was born November 28, 1927 here in Coburg. She was the youngest child of Bertha and Emil Forchheimer. Anne remembered many things about growing up in Coburg. An early memory is of being a small child, peeking through her front room window at a torchlight parade of the National Socialists welcoming Hitler to Coburg. The parade moved along this very street, Banhofstrasse, from the train station to the rally in the Marketplatz. Hitler rode in an open car. She remembers her mother trying to move her away from the window, as her mother was afraid of the National Socialists noticing Jewish children or Jewish homes. This was probably in 1934 when Anne was 5 years old. Anne remembered her father repeating “I am a German Citizen.They can’t do this to me. “ as each additional restriction placed on Jews by the Nuremburg laws was phased in. Emil was not only a German citizen, he was a decorated veteran of Kaiser Wilhelm’s army.Anne remembered her father separating from his non –Jewish business partner as required, and then working alone as a traveling salesman.She kept the necklace that the non-Jewish partner had given her as a birth gift for her entire life.

Anne gave credit to the presence of the clinic across the street from her apartment for sparking her interest in nursing, her lifelong career. She loved to watch patients walk in and out of the clinic being greeted by the nurses there.

She was glad on her 2008 visit to Coburg that the clinic had grown and was still seeing patients.

Anne spoke often about how the adults in her community worked at keeping the children sheltered and protected, so that she remained as ignorant as possible of the risks faced by Jews under the Nazi regime. However, she faced cruelty at school. She wrote about her teacher smiling as other students pulled her hair, pushed her or tripped her. In her brother’s class, there was a separate Jews bench where her brother Franz and cousin Robert sat. The teacher in that class walked over to them many times a day loudly jingling the coins in his pocket, saying “oh you Jews love the sound of money”. They were also harassed in the schoolyard.

She distinctly remembered crossing the bridge over the river Itz on the way to school. The bridge was where anti Semitic posters, cartoons and newspaper articles were posted. She felt very alone and vulnerable crossing the bridge. And angry, because no one that she knew looked or behaved like the people in the anti-Semitic propaganda.

While the actual date is unclear, she remembers being stopped by the principal on the way out of school one afternoon and told not to return, that Jews could no longer attend school with German children.

Her best memories of this time, probably late 1936 or early 1937, until Kristallnacht, November of 1938, were from the Jewish school at the Hirsch home. She said that as anti Semitic incidents and tensions increased, and as her own eldest brother Peter left for the United States, the school at the Hirsch home was where she felt the most safe. One specific memory from the Jewish school was that to teach Jewish life cycle events, the school staged a mock wedding. Anne was the bride and her friend Walter Levy was the groom. Walter, as you know, died in the Riga ghetto, and his Stolperstein was placed this past September.

Her most vivid memory from Coburg is what happened on the Kristallnacht. In 1988, as the fiftieth anniversary approached, Anne wrote an article for the Los Angeles Times about what happened to her, in Coburg on Kristallnacht. A German translation of this article appears in Mr. Fromm’s book “Der Coburger Juden”. I won’t retell those events now, except to say that after Emil’s arrest on Kristallnacht, Anne did not see him again until she arrived in London six months later.

After Kristallnacht, Emil left Germany in January of 1939 and then Franz left in February. After his departure, Anne and her mother Bertha spent three months in Gotha with Bertha’s mother Babette before Anne left on a Kindertransport in May 1939. Bertha was one of the last Jews to leave Germany before the war started, leaving in July 1939. Anne and Franz were in a Boarding school in England full of refugee children. Emil and Bertha were in refugee housing in London waiting for their immigration permits to arrive, which did finally happen in April 1940.

Anne always felt that her escape from the Nazis and her life in the United States exemplified the old German phrase “More Luck than Brains”(my best transliteration of her actual words is Mere Gluck de fer Shtunt – which may more accurately translate into More Luck than Sense). Anne really did have a lifesaving uncle in America – Emil’s brother Louis Forchheimer of Alpine, Texas – who carefully and methodically filled out the forms and wrote the documents to bring both his brothers and their families into the US. Anne was 12 years old when she arrived.

Anne’s experiences here in Coburg shaped much of her character for the rest of her life. She had a profound sense of gratitude for the escape and survival of her family – she was incredibly aware that she had done nothing special to survive, she just was lucky and had relatives who could sponsor her in the United States. She was furious with the German people for adopting National Socialism and perpetrating the Holocaust. The scars of the persecution she had suffered, however mild compared to many others, were lifelong. It took many years of living in the California for her to feel fully comfortable as a Jew. For many years she refused to purchase German manufactured goods. She repeatedly promised she would never go back to the land that threw her out, and she did not for seventy years. Two major events led to her decision to come to Coburg in 2008. Most important of these was her reunion with childhood friend Marie Louise Hartung whom she had known as a child in the Ruckertshule in 1935. The other was the curiosity of her children and grandchildren to see where she had come from.

In addition, from her experiences here in Coburg Anne developed an abiding commitment to social justice for those marginalized in American society – from the civil rights movement in the 1960s to promoting rights for immigrants in California to working to eliminate persecution based on sexual orientation. She cared about the rights of every individual and worked to preserve them.

Anne would be quite honored that her visit in 2008 inspired you to place this marker. She would also tell each and every one of us here today that the goal of building a society in which all people are valued and protected has not been accomplished, and that there is yet work for each of us to do.